Thanksgiving is a time to show appreciation for all the special people who have touched our lives in some way. This year, we would like to share Tusnee McDaniel’s incredible story of determination, love, triumph, & gratitude. Her will to persevere despite all obstacles is an inspiration to us all.

Tusnee met her husband Kerry on a United States Airforce base in Thailand. They married and moved to California where Tusnee earned her United States citizenship. As a young couple, they didn’t have a lot of money so Tusnee cleaned offices for $75 monthly to help provide for her growing family. After years of hard work, Tusnee decided to pursue her love of Thai food. She sold property she owned in Northern Neck and used the proceeds to purchase a decrepit gas station in Gloucester Courthouse. Tusnee planned to convert the old gas station to a to-go restaurant but due to termite damage, the building she purchased had to be demolished. Fortunately, the community rallied to help make Tusnee’s dream happen and in 2007, Bangkok Noi was built at 6724 Main Street in Gloucester, Virginia. 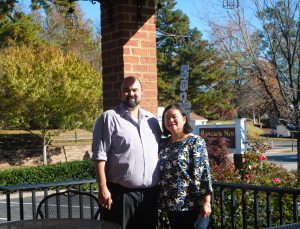 There were people who didn’t believe in Tusnee’s vision of authentic Thai food in Gloucester. In fact, they expressed concerns she would fail but Tusnee didn’t become discouraged and she did not give up. She continued to work hard and on opening day, Tusnee was both amazed and delighted to see customers lined up at the door anxiously awaiting her grand opening.

Although Tusnee endured many hardships, she bonded to her purpose and was determined to see it through. Tusnee didn’t just survive, she thrived and now operates two restaurants with her family. At Thanksgiving and all throughout the year, we’re thankful for the hard workers, the dreamers, and those determined to reach their goals no matter the obstacle because they are the backbone that makes Gloucester such a wonderful community to live in.

From our family to yours, Happy Thanksgiving!

The Helen Haley team has proven to be the best investment I could have made. Your years of relevant experience, prompt and friendly customer service and problem resolving abilities have contributed greatly to the overall success of my property transa… END_OF_DOCUMENT_TOKEN_TO_BE_REPLACED Michael K.
Susan represented me on the sale of my second home. I am a licensed real estate agent but chose to enlist Susan for her knowledge of the local market. Being a licensed agent, I am somewhat picky and have high expectations. Susan met, and exceeded eve… END_OF_DOCUMENT_TOKEN_TO_BE_REPLACED David Bluthardt
Helen has sold me several properties over the years. We have had such great service that we have and will continue to use her for all of our Real Estate transactions. Jack and Shannah
Helen found us exactly what we were looking for. We loved working with her; she is a wealth of information on related services. Bob & Carolyn
Susan was very good at explaining the process of buying and selling a home. Her attitude was always cheerful and positive. I would recommend her to be your broker. Ann and Bob Clark
Susan was a pleasure to work with! She was knowledgeable about the properties and understood what we were looking for and respected the fact that we had a price range. She was very easy to contact with questions and was quick to return any phone call… END_OF_DOCUMENT_TOKEN_TO_BE_REPLACED Dan and Laura Schultz
Patience and professionalism are just some of the attributes of Helen and her team. Helen will not give up until she finds you exactly what you are looking for. I have in the past and will continue to refer her to my family and friends. John & Joan
We value Beth as our realtor because of her character and professionalism.  Whenever we are interested in a property, she goes the extra mile in making herself available to accommodate our schedule.  There are no high-pressure tactics, as she truly… END_OF_DOCUMENT_TOKEN_TO_BE_REPLACED Sandra Brown
She knows her market. She attends most of the showings with other agents at her listings. At these showings she is able to answer questions the buyer has and keep the buyer engaged. We selected her because she does go to showings and I feel this is e… END_OF_DOCUMENT_TOKEN_TO_BE_REPLACED David Van Blaricom
Susan Corson provided outstanding assistance with our new home planning and our pending move to Virginia. She was extremely knowledgeable about the areas we were considering and maintained positive communication throughout the process. Susan’s advice… END_OF_DOCUMENT_TOKEN_TO_BE_REPLACED Leon and Norah Iveson